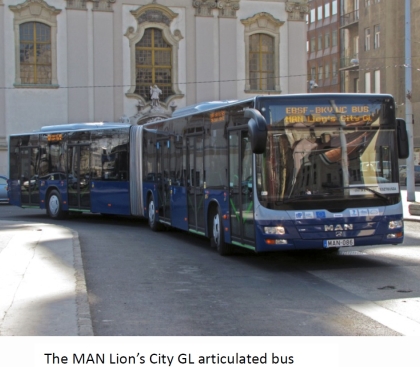 The aim of the 47 international members of EBSF (European Bus System of the Future project) is to provide technical improvements to help effectively buses’ operations and to create an attractive alternative for public transport users.

BKV Zrt., as the Hungarian operator partner of this European Union’s project, undertook the testing of the articulated five-door MAN bus in real operational conditions since the 23rd of March 2011 on the line 86. The results of this experience will help manufacturers and operators.

The MAN Lion’s City GL type 18.75 meters long developed for EBSF in the standard BKV-coloured is an air-conditioned articulated bus with impressive interior design and special equipments. Instead of the usual four doors, the five-door bus was unusual in Budapest but with its intelligent solutions – like the anti-kink door and the motion detector – it effectively helped improving the passenger flow. With the help of the opening-closing function- so far only used on tram - passengers could also activate the doors. The beginning of the testing period focused on the automatic door control system as it appeared in the first operational day that people could not stand in front of the door on the yellow-striped area in the crowded peak hours. However, the light-barrier did not let the doors close for safety reasons and it stopped the already started door closing process. Consequently the bus was stuck at the bus stop for several minutes. The MAN experts quickly reacted: one day later the driver controlled the closing of the doors, so the problem was quickly fixed.

The on-board computer communicates with the centre independently: it transmits data about the vehicle’s position, the errors that might occur and the number of passengers. Every minute, the system records the GPS coordinates of the bus so that its position can be followed on a map. The data of the infra-red laser 3D automatic passenger counting equipment, located above the doors, shows the utilization rate of the bus. The system is able to differentiate human beings from objects, its accuracy is outstanding: 96.9%.

Among the passengers the translucent bellows made a hit, just like the number and the placement of handrails, the setting of the seats and standing places or the retrofit LED interior lighting but especially the row of coloured LED lights that can be set in different colours in the front and the back of the bus. Despite the warning light and the information stickers, the folding seats activated by the driver were often forced, thus the fixing mechanism had to be repaired several times.

The reception of the passenger information equipment was also good. On the TFT screens placed before and after the bellows, passengers can follow the current stop, the order of the coming stops, the transfer options and the current time. Besides, the automatic operation is a big help for the driver. The testing the fire extinguishing equipment next to the engine in the engine room which is able to transfer data showed that even in emergency situations it operated trouble-free. The bus had minimal maintenance requirement, and it has been running 98.5% of the time during the first six months. The 320 hp six-cylinder MAN-diesel engine proved to be a very dynamic resource. It moved the bus effortlessly, even under full load with a good fuel consumption rate. No problem was raised concerning the access to the control points, the placement of the engine, exhaust system, gear-box and auxiliary devices. This reflects the forward-thinking and careful design.

Thanks to the careful and prudent constructors, the control of the bus also reached an excellent score: the vehicle follows the smallest movements of the steering wheel and also completed the tightest turns without any problems. No problem was discovered concerning the gearbox or the air-conditioning. While the former provided the quiet running, the latter provided the pleasant, comfortable passenger area. The automatic system that worked in cooling mode 80% of the operating hours and adapted to the outer temperature provided 5-6 ˚C colder temperature in the passenger area but it also turned out that the cooling performance decreases on the vehicle in traffic congestion.

On bus line No. 86,, 400 passengers were questioned before the testing period after the beginning of the operational test. On the basis of the received responses during the EBSF project, the service quality and the reliability of the bus improved; the passengers outlined the cleanliness of the vehicle, the comfort and the adequate number of the seats but also found inner temperature and sound level better. On the new bus, 88% of the passengers rated the quality of the applied developments good or very good.

The EBSF test in Budapest is continuing for few weeks more and new results are expected.

EBSF, the European Bus System of the Future is an initiative of the European Commission under the Seventh Framework Programme for R & D. Starting in September 2008; EBSF is a four-year project gathering 47 partners in Europe with an overall budget of 26 million Euros. EBSF is coordinated by UITP, the International Association of Public Transport. 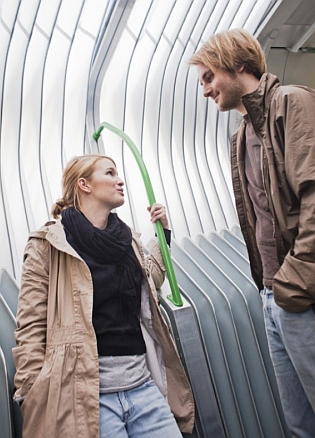